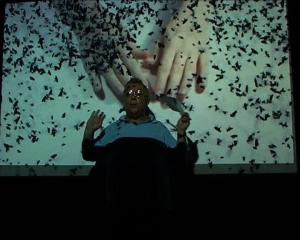 Ruti Sela Born (1974) rutisela@gmail.com rutisela.net exterritory.org Ruti Sela, artist, graduated from the Bezalel Academy of Art and Design, Jerusalem, and at the Film Department of the Tel Aviv University . She teaches at the Haifa University , Basis Institute of Art and Design and at the Midrasha Faculty of Arts. Throughout 2011, she has been a guest resident at the Rijksakademie, Amsterdam. She has received a number of prizes and scholarships, among them the Anselm Kiefer prize. Her work has been shown internationally at various exhibitions and venues, including the Biennale of Sidney (2006) Istanbul Biennial (2009), Berlin Biennial (2010); Manifesta 8 (2010), Israel Museum, Centre Pompidou, Paris; Art in General, New York; Chelsea Art Museum, New York, Tel-Aviv Museum, Tate Modern, Jeu de Paume. In 2009 she initiated together with Maayan Amir “The Exterritory Project” on which they have won an award for young artist from the The United Nations Educational, Scientific and Cultural Organization (UNESCO). View all posts by rutisela